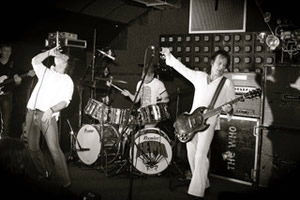 If Calsberg did tributes… Quadrophonia is an authentic live tribute to The Who. Adrenalin fuelled Rock and Roll… Capturing a magical point in time when The Who was the greatest Rock and Roll band on earth. The set list contains a majority of the most popular material from The Who’s catalogue until the final days of Keith Moon. Quadrophonia’s live show recreates this period in the early 1970′s with the aid of authentic stage wear and backline, powerfull stage performances together with stage theatrics and a full ‘WHO’ light and laser show results in a nostalgic rollercoaster ride back to the days of ‘Live at Leeds’ and thro’ into the seventies.